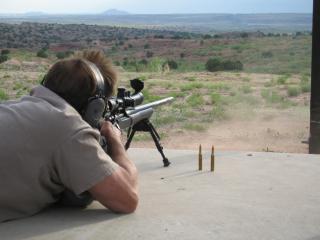 I recently shot the Steel Safari rifle match, run at a private ranch near Logan NM. This match follows the general idea of the Keneyathlon-- movement, target location, and engagement. The match format this year was two field courses, and a couple side-stages.

The field courses comprised a "short" 2.0 mile and a "long" 2.5 course. In each of these events, shooters departed the meeting area at 10-minute intervals, and followed orange or pink flags along the route. The path was cross-country, usually off even a foot-path, with elevation changes and some obstacles to negotiate. The "short" course was actually more physically challenging due to elevation change and terrain features. Movement was not timed.

Each long course had approximately 10 stations. Upon arrival at a shooting station, the shooter waited at two yellow flags until the shooter acting as his "RO" was ready. Once ready, the shooter would approach the position and the RO would read him the stage briefing. A typical briefing specified the shooting location and any restrictions on shooting position or equipment used, along with flags or geographic features locating the general area in which to locate targets. Almost all rifle stages had 5 targets: 4 normal targets and 1 bonus target. 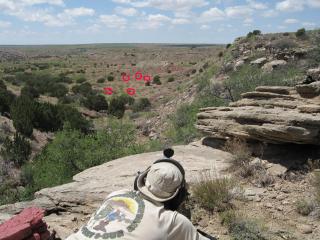 The shooter got 1 point for locating each normal target, and one point each for hitting the normal targets. Once all the normal targets had been engaged, the shooter could engage the bonus target for 3 points. There was one stage that only had 2 bonus targets. At some stations, instead of 4 regular targets, there would be 2 targets, which would have to be engaged once from each of two positions. Once at a station, each shooter had generally 4 - 5 minutes to locate, range, and engage the targets.

Each day, there were a couple pistol stages, just to keep things interesting. These targets were worth 1/2 point each, and were things like steel chickens or pigs at 10-20 yards. At one stage, you started out at about 20 yards and shot at a steel ram. If you hit, you got to retreat 10 yards and try again, until you got to the last position at approx 60 yards.

The longest rifle shot was a bonus target at 725 yards. Most targets were between 300 and 500 yards. Shooting positions were varied. About 1/3 of the shots could be taken from what I would call a good prone with bipod. The rest, due to terrain features, target location, or stage briefing, were shot from the best improved position the shooter could come up with. Two stages were shot offhand.

Heat and sun were issues this year. Temps were 100F in the shade, with no cloud cover. Shooters found shade under scrub bushes while waiting on the course (for shooters before them, or to RO the next shooter). There was some relief as the winds picked up Sunday. To be successful at this match, a shooter needed to bring together a number of skills. First, he had to be able to locate targets spread out and sometimes hidden in the terrain, then he had to range them. Laser range-finders were allowed. Next, he had to know his rifle's trajectory to be able to make hits at arbitrary distances out to 725 yards. Beyond just dialing, it was helpful to know things like point-blank range for closer engagements, and how much of a difference in target distance made a difference at longer range. Finally, he had to be able to find and get into improvised and hopefully stable positions with some speed. At each stage, over-all efficiency was important. There's no time for fiddling around.

Overall, this was one of the best rifle matches I've shot so far. Targets were challenging, and the terrain of the course is fantastic. Winds on the course are deceiving, and the angles change dramatically as you move around a large "cap" rock formation and shoot down into flats below. My setup-- I shot an AI-AW chambered in 260 Remington shooting the 139-grain Lapua Scenar bullets. Scope is a S&B 3-12x50mm PMII (metric). For ranging, I used the Swarovski LRF. Suppressor (cover visible) is a .30 caliber JET.
Results Discussion
Join in the discussion on The High Road.