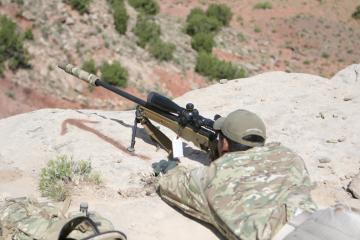 Sound suppressors are being used increasingly at field long-range rifle matches for their practical benefits to the competitor.
Why do you have silencers in that article - aren't they illegal? This is what I hear from readers from time to time. No, silencers are not illegal in the United States. That is, unless you live in CA, DE, HI, MA, MI, MN, NJ, NY, RI, or VT. If you live in one of those states you're out of luck. Sorry! Try to elect better politicians.

For the rest of us in the Free United States, sound suppressors - also called silencers - can be owned legally by private citizens provided a little extra paperwork is filled out and approved by the ATF. Silencers (and other NFA items) are transferred to individuals on an ATF Form 4, which requires a $200 stamp tax, a chief law enforcement signoff, and a set of fingerprints to be submitted to the ATF. In some cases a "corporate" transfer can be done that bypasses the requirements for fingerprints and the local chief law-enforcement signoff. It usually takes between 3 and 6 months for a Form 4 to be approved by the ATF. At that point you can take possession of your shiny new suppressor. The suppressor itself is the NFA item; there is no legal restriction on what firearms it is mounted on.

Silencers, along with other National Firearms Act (NFA) items, must be transferred only by Class 3 SOT (Special Occupation Tax) holders, which is an additional license on top of a regular FFL. To buy a suppressor, you can choose one your local Class 3 dealer has in stock, or you can have them order it in for you from the manufacturer. A manufacturer to dealer transfer is done on an ATF Form 3, and typically takes 10 days to 3 weeks. 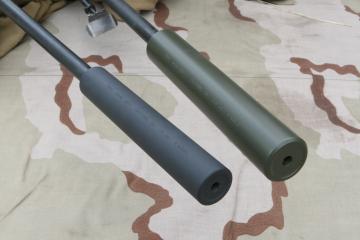 Thunder Beast Arms Corporation model 30P-1 and 338P-1, for cartridges up to .300 Win Mag, and .338 Lapua Mag, respectively.
But why do I want a silencer anyway - I'm not an assassin or anything! If you hear a shooter say that, you can bet your beer money that they haven't shot a modern suppressor. Modern suppressors allow the use of full-power ammunition, do not reduce the muzzle velocity, do not contact the bullet during flight, and usually aid accuracy. On high-power rifles, a suppressor acts like a muzzle brake and reduces recoil, and of course, the "ka-BOOM" report of the shot is modulated into a sound not unlike high-pressure gas escaping from an air hose being disconnected.

I have been shooting high-power bolt-action rifles at long range in competition since 2004. The same year, I had the opportunity to try a modern suppressor on a long-range rifle and there was no going back. Since 2005, my long-range shooting is done almost exclusively suppressed - the only exceptions being F-class (which prohibits their use) and for comparative testing with brakes or bare muzzles. If you take an accurate bolt-action rifle in .260 Remington or .308 Winchester and fit a suppressor, the recoil will be noticably reduced and the report will be more similar to a .22 LR. Most premium .30 caliber suppressors will reduce the report by 25-30 dB, which puts them at an "almost" hearing-safe level. While I do recommend wearing some earpro because hearing damage is subtle but cumulative, the entire experience is more pleasant with a suppressed rifle.

Historically, suppressors had rubber baffles that slowed down the bullets and ruined accuracy. Modern suppressors don't have any of these drawbacks. While there are competing theories whether or not suppressor is more accurate than a bare muzzle (or muzzle brake), in practice virtually all shooters will themselves be more accurate with a suppressed rifle due to psychological and physiological factors-- call it "shootability."

In the last few years, the use of suppressors by competitors has gone from an oddity to being commonplace. At recent matches such as the 2010 Steel Safari, as any as half of the top ten competitors use suppressors. 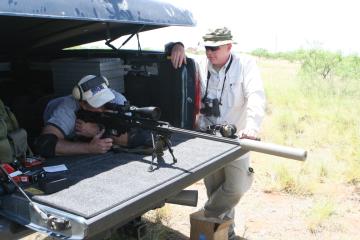 Competitors at the 2010 Steel Safari had the opportunity to shoot a Barrett model 98B in .338LM with the TBAC suppressor, at targets out to 1000+ yards.
Several years ago two fellow long-range shooters and I had the opportunity to start a suppressor manufacturing company. We all shared a passion for long-range shooting, had a history of competition, and were convinced that shooting suppressed was the way to go. Thunder Beast Arms Corporation, based in Cheyenne Wyoming, was formed to produce the best suppressors for practical long-range rifle shooting. Our "cans" - as they are sometimes called informally - are designed for accuracy, durability, and light weigh, while maintaining best in class sound suppression levels.

Although I am proud of our products, the reality is that there are a lot of good suppressors on the market right now, and someone in the market for one can dial in the performance, application, and amount he wants to pay very precisely - there will almost certainly be a suppressor on the market that meets his requirements.

If you have a chance, see if you can get a suppressor demo lined up - I guarantee you'll be impressed.