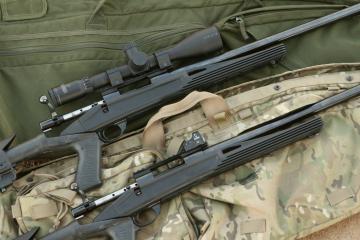 # 1. The Axiom stock is available in aluminum (top) or fiberglass-reinforced polymer (bottom) for weight savings. For quick snap shots, the author equipped the lighter rifle with a DocterSight red dot optic.
You have to give credit to manufacturers who break out of their comfort zones and into new markets. The Howa Axiom rifle, based on their 1500 action, with a stock from Knoxx Industries is specifically designed to reduce recoil and fit different shooters, or the same shooter with or without body armor. The Burris XTR scope represents Burris' foray into the long-range tactical shooting field.

Howa, a large Japanese machinery manufacturer, has been heavily involved in the armaments industry since 1940, including manufacturing the famous Arisaka rifle. Legacy Sports International is now the U.S. importer and offers a vast array of Howa rifles.

The Howa 1500 bolt action has a push-feed design with a spring-steel extractor and spring-loaded button ejector. The bolt utilizes two lugs like the Mauser and Remington 700. The action has a three-position safety just to the right of the bolt shroud. The action itself has a flat-bottom design with an integral recoil lug.

The distinctive feature of the Howa Axiom is the Knoxx Axiom V/S Rifle Stock. The Knoxx stock provides recoil reduction through two internal spring systems: first, the stock tube telescopes into the butt-stock itself; second, the receiver and fore-end of the stock move relative to the stock tube at the pistol grip. The butt-stock assembly telescopes just like an AR-15 carbine stock, to provide a variable length of pull to accommodate different shooters or shooting with versus without body armor. 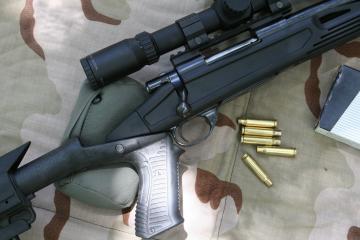 # 2. The Knoxx Axiom stock absorbs recoil where the pistol grip meets the main stock and where the stock tube enters the butt-stock assembly.
The Knoxx stock is available in two versions, identical in outer appearance. The first is made from a billet of aluminum and has a powder coating. The second is made from fiberglass-reinforced polymer to save weight at the expense of rigidity.

Burris Optics, based in Greeley, Colorado, has origins in the 1970s from Redfield. In 2003, Burris introduced the Xtreme Tactical scope line to provide features required for tactical and long-range shooting.

Legacy Sports International, Howa's U.S. importer, sent me two Axiom rifles chambered in .308 Winchester. The first has the aluminum stock, the second has the molded polymer stock. The former seems stouter, but is noticeably heavier. Both rifles have a 24-inch heavy barrel and are otherwise identical. They came with zero-degree cant Picatinny rails for ease of scope mounting.

The Axiom stock is easily adjusted for length of pull, and provides reasonably good ergonomics. The supplied cheek riser put my head at more or less the right height for scope use, unlike many sporter stocks which have a comb height more appropriate for iron sights. While the pistol grip has an unconventional look for a hunting rifle, it provides good control of the rifle and AR-15 shooters will feel at home. A sling stud on the bottom of the fore-end accommodates a Harris bipod. 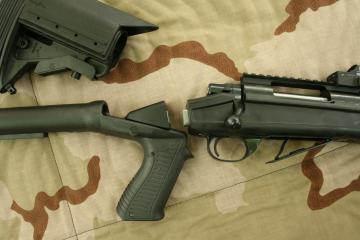 # 3. The Axiom can be disassembled into three main parts - butt-stock, pistol grip and stock tube, and barreled action - with just a hex wrench.
On the theory that the scope should cost about as much as the rifle it's going on, I chose a Burris 3-12x50 mm XTR scope. Twelve power magnification is enough to shoot practical targets out to 1000 yards, if the rifle and shooter are up to it, and it saves weight compared to higher-magnification options. The XTR has target-style windage and elevation turrets with caps. On the left-hand side of the turrets is a unified parallax and focus adjustment on the inside, with the reticle illumination brightness control on the outside.

The XTR clicks are one-fourth inch per one-hundred yards, or 0.25 inches per hundred yards (IPHY). It is important to note that these IPHY clicks are approximately 4.7 percent smaller than true moa clicks. The elevation knob is of the multiple-turn type and provides 16 IPHY in 64 clicks per revolution. The scope yielded about five full turns of the knob from bottom to top, for a total of 80 IPHY elevation.

The Burris XTR was mounted on the aluminum-stocked rifle using Burris' Xtreme Tactical 30 mm rings. On the polymer-stocked rifle, I mounted a compact DocterSight red-dot sight directly to the Picatinny rail, in order to keep the weight down. The no-magnification red dot sight allows engagements as far as the shooter can see with his unaided eyes.

The XTR's reticle is Burris' Ballistic Mil-Dot, which has a normal mil-dot at nine, twelve, and three o'clock, but a calibrated ballistic bullet drop compensator going down at six o'clock. The intent is that the reticle demarcations can be used to make hits targets without touching the elevation knob, once you cross-reference your load to the BDC calibration available from Burris. 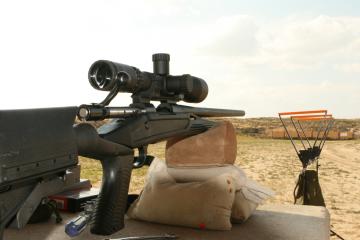 # 4. Accuracy testing at 100 yards revealed both Howa Axiom rifles averaged just under 2 moa groups with a variety of match, hunting, tactical, and surplus ammunition.
To test the Axiom, first I zeroed the Burris at 100 yards using 168-grain Federal Gold Medal Match ammunition. Accuracy results were mixed. I tested seven types of match, tactical, hunting, and surplus ammunition including loads Black Hills, Federal, and Hornady. The average group size was just under two inches at 100 yards. Groups strung both vertically and horizontally. The Black Hills 175-grain load managed one group around an inch.

I have learned that it's important to "box test" a scope before attempting to stretch the rifle's legs at long range. If the scope isn't tracking properly, attempting to dial elevation to engage long-range targets will be an exercise in futility. A box test involves shooting a group with the scope zeroed, dialing up at least ten inches worth of clicks and shooting another group; dialing the same amount right on the windage dial and shooting another group; then dialing back down for another group; and finally dialing back left to the original zero and shooting a final group. If the scope is tracking correctly the first and last groups will coincide, and the distance between groups will correspond exactly to the knob movement. Since the Axiom was giving me inconsistent accuracy results, I clamped the rifle in place and dialed the scope, watching how the reticle moved on my target. Since I knew the size of the features on the target, I could verify that the knob clicks moved the point of aim the correct amount. 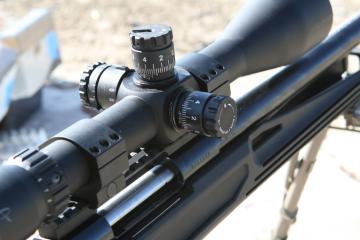 # 5. Removing the caps reveals the 16-moa-per-turn target turrets on the Burris XTR 3-12x50 mm scope.
Next, I took the rifle out to some open land where my shooting partner and I regularly place targets out to 1500 yards. Since the practical limit of 308 is 800 to 1000 yards, we set a full-size IPSC silhouette at 980 yards and several smaller steel plates at 300 and 500 yards. Accuracy at medium and long range tracked right around two moa, which made sense considering the 100-yard results. The 940-yard plate could be hit about 50 percent of the time, while the closer plates which were larger in moa at their distances, could be hit closer to one for one. With the zero-degree cant Picatinny base, the scope didn't have quite enough elevation for 980 yards, however, with the knob dialed all the way up, I used the first reticle line down from center to make hits.

Shooting the lightweight Axiom with the DocterSight was a different affair. The small unity-power red dot sight is lower to the bore and provides heads-up aiming. Any practical target that could be seen within a couple hundred yards could be hit.

My overall impression of the Howa action and barrel is that it's a reasonably well built commercial action, and works about how I expected it to. When single-loading rounds, they had a tendency to nose-dive into the feed ramp if simply placed on the follower. The action was smooth and the safety has a positive feel to it. The action had no problem firing or extracting any of the rounds, including a bunch of Australian F4 7.62 NATO surplus. 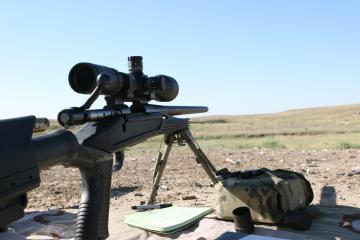 # 6. On the long-distance range, the Howa held about 2 MOA out to 980 yards, which is sufficient for mid-range practical targets.
The triggers were above average for factory rifles, and broke around five pounds. The Picatinny rails were mounted solidly to the receiver and I didn't experience any loosening over the course of the tests. My only complaint about the setup of the action itself is that loading multiple rounds into the magazine, done from the top, is made difficult by the presence of the bridging Picatinny rail. A detachable box magazine system would be a natural match to this setup.

One of the main features of the Axiom stock is its recoil abatement design. The stock is spring-loaded in two spots to cushion the stock's impact. I found it effective for that purpose, but an unintended side-effect is that the barreled action now moves during the shot and follow through. A tenet of rifle marksmanship is to get the rifle tight into your shoulder to keep everything the same shot to shot. The movement inherent in the Axiom design works against this. The other practical effect is that spotting impacts is more difficult because the rifle, and thus the scope, is moving in recoil. This observation was echoed by my shooting partner.

The Axiom stock is easy to install, requiring only a screwdriver and hex wrench. With three screws removed, the Axiom stock comes apart into three main parts. It can be installed or replaced in a matter of minutes. The recoil lug of the Howa 1500 action drops right into the Axiom and the action is secured to the stock by two action screws.

Knoxx is to be commended for designing a modular and adjustable stock with the pistol grip that many prefer. The recoil reduction features may help the shooter whose first barrier to marksmanship is flinching from recoil during practice. At a MSRP of $489.95, the Knoxx Axiom stock is priced almost the same as McMillan's tactical stocks. The Axiom stock would be more compelling at a cheaper price point.

Overall, I felt the Howa left performance on the table. While I might expect a sporter with an unbedded lightweight barrel to shoot 2 moa with hunting ammunition, there's no excuse for a heavy-barreled, free-floated 308 to average over one moa shooting Federal Match ammunition. The Howa has potential, with good build quality and no major flaws, but needs to address out-of-the-box accuracy.