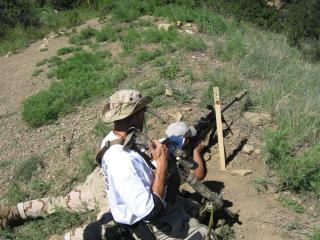 Colorado MultiGun just concluded its first annual Practical Rifle Team Challenge (PRTC), and I am pleased that it was so successful. This was a different kind of match than what both long-range ("sniper") shooters and 3-Gunners are used to, and from the positive comments we've heard so far, I believe people will be talking about this match for a long time.

The purpose of the match was to "test a 2-man team's skills shooting rifle, carbine, and pistol to their effective ranges at practical targets in the natural terrain using what gear they can carry." The location for the match was the NRA Whittington Center, which many of you know from Rocky Mountain 3Gun. If not, the land consists of old old mine claims (the ruins of hose buildings are spread throughout), along with a world-class conventional shooting facility, and many thousands of acres terrain.

Building the match, we wanted to stress practical long-range rifle and carbine shooting at reactive targets, while requiring the shooters to move and negotiate the natural terrain. As a result, the stages were "run" more or less like 3Gun stages (where one team shoots at a time on the clock), but with time limits much longer than the average 3Gun stage. Our shortest time limit on the field stages was 10 minutes, and the longest was 30 minutes.

The match consisted of 7 stages: 4 field stages spread throughout the "front" NRAWC range (N. and S. of the main E/W road), 1 "mega-stage" held on the North side of the NRAWC property (off HWY 555 where the Sporting Rifle Match is held), and two night stages on the 1000-yard High-Power range. The two night shoots were the only stages held on square ranges, and that was just for safety.

Part of the challenge of this match was taking some broad parameters we set down in the match description, and the team figuring out what they need to bring and carry to successfully negotiate the courses of fire. I had one shooter ask me how they were supposed to mechanically range targets without knowing the target sizes.

General & Scoring
At each position, there was a stake in the ground which the shooters had to be able to touch while shooting, and written on the stake was the number of each type of target ("1R, 3C, 1P"). In addition, pistol targets were painted blue, carbine targets orange, and rifle targets white. Each rifle target had to be hit once, with no more than 2 shots fired; carbine largest were hit twice; and pistol targets once. Each rifle hit was worth 4 points, carbine 1 each, and pistol 1. Each full minute the team finished early earned them an additional bonus point.

There were no "gimme" pistol targets in this match. We had several steel IPSC targets beyond 40 yards, and many small plates and poppers from 20-30 yards.

Stage 1. Mine
This stage had 4 shoot positions, with 14 rifle targets, 1 bonus rifle target, 9 carbine target, and 1 pistol target. At the second shooting position, there was an 1180 (KD) bonus rifle target, which was worth 10 points, or 2.5x a regular rifle hit. There was no FTE penalty for bypassing the bonus target. This same target was re-engaged as a mandatory target from P3 and P4, where it was right around 1000 yards. There were only a half dozen hits on this target during the entire match, and three rifle shooters hit it from the "bonus" position. I managed to tag it from the two mandatory positions, but missed at the bonus position. The time limit was 20 minutes, and most teams finished this stage with a few minutes left on the clock. This stage was won by Moots/Neth, with strong finishes by Buchanon/Brandt, Cross/Clark, and Kuhn/Every.

Stage 2. Graveyard Canyon
This stage had 5 positions, 3 rifle targets, 7 carbine targets, and 14 pistol targets. It was the shortest-range stage of the match, with the longest rifle shot being about 370 yards. The time limit was 15 minutes and most teams had about 5 minutes left on the clock. This stage was won by Moots/Neth, with strong finishes by Smith/Sanchez, Stephens/Allison, and Miller/Swonson. Stage 3. Cannon
This was a much more stationary stage, with only two position separated by maybe 10 yards. From a barricade, both shooters engaged two targets each, and then moved to the the second shooting post where they each engaged 5 targest, carbine to 490 and rifle to about 990. The time limit was 10 minute and most teams finished with about 4 minutes left. The stage was won by Cross/Clark, with strong finishes by Horseman/Neal, Samuel/Kolar, and Moots/Neth. Stage 4. Cooper
This was a long field stage with significant movement, and targets for all weapons. It took place in the Cooper Rifle Walk area, but we placed all our own targets. The time limit was 25 minutes, and most people finished with less than 5 minuts left. The stage winners were Cross/Clark, with strong finishes by Dowd/Ragulsky, Moots/Neth, and Smith/Sanchez.
Stage 5. Sporting Rifle
This was the "Mega-Stage", and had the most movement - probably over 1/2 mile - and the most targest for carbine and rifle. It had I think 23 rifle targets and just under 20 carbine targets. The time limit was 30 minutes. Only two teams finished the course of fire with bonus time point. The stage was won by Stephens/Allison and Samuel/Kolar (tie- same points), with strong finishes by Dowd/Ragulsky and Smith/Sanchez. Stage 6. Night Stage 1.
This stage was shot in full dark. Both team shooters were on the 200-yard line. For 10 seconds, a stationary target was illuminated, then disappeared. It then reappeared and "walked" 20 paces, and then came back 20 paces. Points were essentially total hits. Sternburg/Field crushed this stage with 30% more hits than anyone else, the other strong finishes coming from Stephens/Allison, Miller/Swonson, Dowd/Ragulsky.
Stage 7. Night Stage 2.
This stage had 7 teams on the 300-yard line, each assigned a number (1-7). As time passed, IPSC targets would be raised and illuminated for 10 seconds each. Each IPSC target had a number on its head. When a team saw its number, their "rifle" shooter was to put as many rounds on the target as he could, before it was darkened and lowered. Each target had three 10-second exposures. Each group of 7 teams was on the line for approx 10 minutes. This stage was crushed by Kuhn/Every, who were shooting a 260 AR-10 as their rifle (18 hits). Cross/Clark were only 4 hits behind (14).

Discussion
Join in the discussion on The High Road.